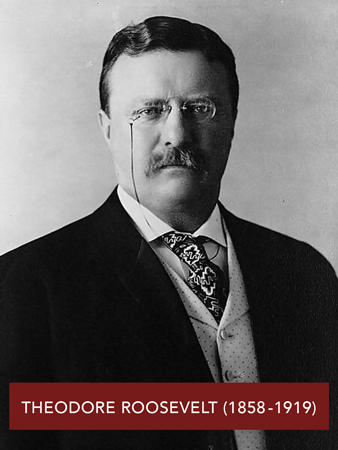 Theodore Roosevelt is the first sitting president to ever visit Rockford. In 1903, in addition to creating the Department of Commerce and Labor, laying the groundwork for the Food and Drug Act, intervening in the Anthracite Coal Strike, and negotiating the Hay- Buneau Treaty to start the Panama Canal, Theodore Roosevelt also made a whistle-stop tour of Western and Midwestern states, giving speeches and visiting landmarks, especially his beloved national parks.

On June 3, 1903, President Roosevelt visited Rockford to dedicate the new Soldiers and Sailors Memorial Hall, built to honor all veterans. In addition to Rockford, on that day Roosevelt also made speeches in Freeport, Aurora, Joliet, Lexington and Bloomington.

While the President was in Rockford approximately 45 minutes, this was not his last visit to Rockford. After his presidency, he returned to our city, especially to visit with the troops at Camp Grant.