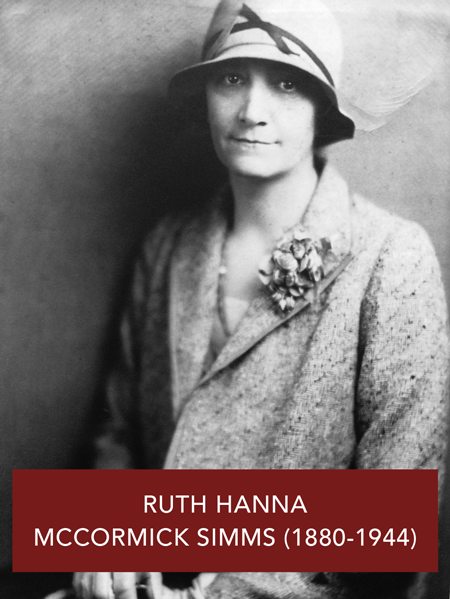 Ruth Hanna McCormick Simms had a full life of politics and newspaper publishing. The daughter of Ohio Senator Mark Hanna, Republican kingmaker, she was introduced to politics at an early age. A progressive by nature, she found a soulmate in her first husband, then Senator Joseph Medill McCormick. Senator McCormick was part owner of the Chicago Tribune and also from a politically-connected family.

Appalled by the unsanitary conditions in Illinois dairies, she founded Rock River Dairy in Byron, Illinois, as a breeding facility to produce sanitary milk for invalids and children. Together, she and Joseph campaigned for causes such as child welfare and women’s suffrage. In 1913, she successfully lobbied the Illinois State Legislature to give women the right to vote in state and presidential elections, the first such law east of the Mississippi River. She continued to work for women’s suffrage until the passage of the 19th Amendment to the Constitution in 1920.

After her husband’s death in 1925, Ruth McCormick continued both in newspapers and politics. She purchased three Rockford newspapers, combining them into Rockford Consolidated Newspapers, Inc. in 1930. She then built this headquarters at 99 East State Street, modeled after the Tribune News Tower in Chicago. She also ran for Congress as a Republican in 1928 and was elected to a term in 1929-1931. She ran for the Senate in 1930, but was defeated. Ruth McCormick continued to be a leader in Republican national politics into the 1940s.

In 1932, she married Albert Gallatin Simms of New Mexico. She sold her dairy farm and purchased a cattle and sheep ranch in Colorado. In 1944, Simms died from complications of a horse riding accident.