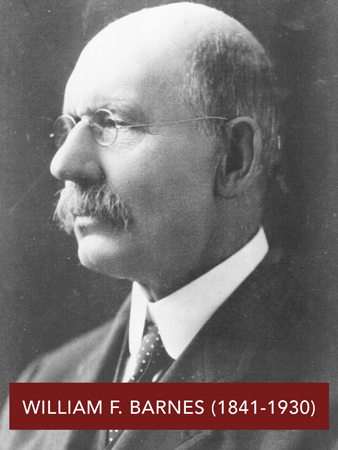 Barnes was born on a farm in upstate New York in 1841, and moved to Rockford as a young adult to help his brother, John. Forming the W.F. and John Barnes Company in 1873, the brothers began to manufacture foot- powered scroll saws and other machinery for the commercial market. As demand for their products grew, the brothers found they needed special metal-working machines. In 1884, they invented a single-spindle drill press that quickly became another in-demand product. The company soon evolved into a metalworking machine manufacturer.

Barnes enjoyed his financial success. He built his Romanesque-style home at 813 North Main Street. In 1896, he purchased a boat, the Electra, at the Chicago World’s Fair. Barnes brought the first electric car to Rockford in 1898. But his personal life soon changed. William Barnes brought his son, Joseph, into the business, where he showed impressive mechanical skills. However, Joseph’s untimely death in 1907 extinguished his father’s joy for work. A few years later, William Barnes retired from the company and died in 1930.