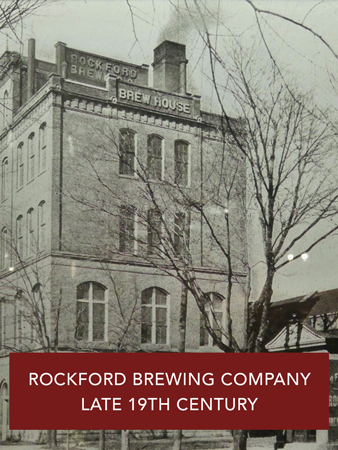 As a young man, Jonathan Peacock immigrated to America from England and first started brewing beer in Chicago, where he worked for Lill & Diversey Brewery. In 1847, he moved to Rockford to set up his own brewery, in this home at the foot of Prairie Street.

At first, Peacock ground his malt in a coffee mill and delivered his product by wheelbarrow. He later built a brewhouse for his Rockford Brewery next door to his home – its current location.

A fire nearly destroyed the Brewhouse in 1894, but the business was rebuilt. Peacock died in 1895, but his sons, Edwin and Frank, continued the business. They both died of tuberculosis – Frank in 1897 and Edwin in 1899. Frank’s widow, Louisa, sold the business in 1899.