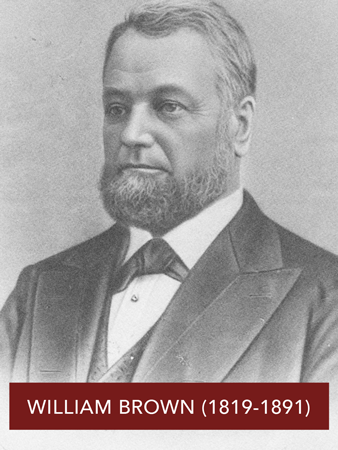 William Brown lived in Rockford for 45 years, serving as a teacher, attorney, prosecutor, mayor, judge, civic leader, and investor. Born in Cumberland, England in 1819, Brown moved to America with his parents in 1827. He studied law in Rome, New York and came to Rockford in 1846.

In 1870, Brown was elected a circuit court judge, a position to which he was re-elected every year for twenty years. In addition to his political and judicial positions, Brown was a member of the citizens’ committee which established the city’s first hospital, Rockford Hospital. He served as the hospital’s chairman of the board and president from 1884 to 1886. He also played a role in establishing the knitting industry in Rockford, investing in the Nelson Knitting Company along with Ralph Emerson.

William Brown died of a stroke and heart failure in 1891. This building, the most important commercial building being built in Rockford at that time, was named after him.