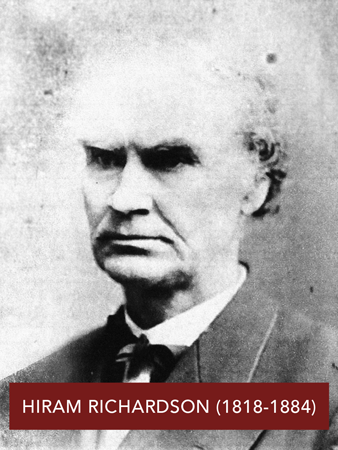 Rockford was a frontier town in the 1830s, a time when pioneers had to have ambition, perseverance, and good luck to prosper here. Hiram Richardson, born in Orange County, Vermont on August 24, 1818, had all three.

He arrived in Rockford in 1837, three years after it was first settled. He laid a claim, built a log cabin, and then returned to Vermont to marry Lucetta Thurston in 1841. He brought Lucetta to Rockford, only to leave again in 1849 for the gold fields of California, sending her and their children back to Vermont.

Richardson walked from Illinois to California with friends and a team of oxen. There he worked as a miner, returning to Rockford in 1850. Richardson was a pioneer brick maker in Rockford and bought what is now known as the Richardson building as a commercial investment in 1869, adding two more floors. He died on January 13, 1884, at the age of 66. He is buried in Cedar Bluff Cemetery.