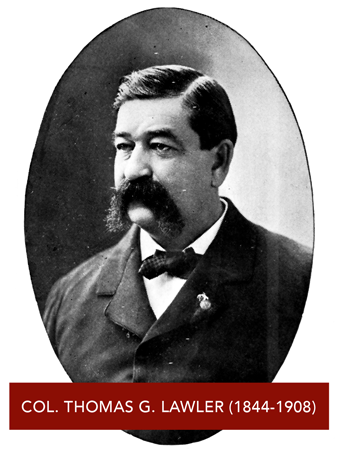 Born in Liverpool, England in 1844, Thomas G. Lawler came to Rockford with his family as a young boy.

In 1861, he enlisted as a private in Company E, 19th Illinois Volunteer Infantry to serve in the American Civil War. At the Battle of Missionary Ridge (1863), near Chattanooga, Tennessee, Lawler was credited with being the first man from the 19th Illinois Volunteers to break through the Confederate defenses, carrying the company colors with him.

After the war, he was appointed Postmaster of Rockford by Rutherford B. Hayes and served until 1893. From 1894-1895, Lawler served as the 23rd Commander-in-Chief of the Grand Army of the Republic, the first and largest veteran’s organization dedicated to those who served in the Civil War. The national headquarters was located here in the Brown Building. Lawler died on September 3, 1908, aged 64, and is buried in Cedar Bluff Cemetery.