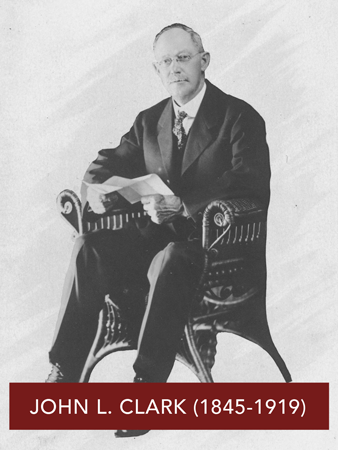 John Lewis Clark was born in Burlington, Vermont in 1845, the son of Irish immigrants. At age 12, he moved to Rockford with his family. As a young man, he served in the Union Army during the Civil War.

Clark established a hardware store at 519 East State Street with his partner Norman Robinson in the 1870s.

One of his continuing concerns was that flue stoppers – devices to cover up a hole in the wall when a stove pipe was removed – took up too much space on his store shelves. To resolve this, he invented a collapsible flue stopper that took up less space.

They were immediately popular. In 1904, Clark and his son, Harold, started the J.L. Clark Manufacturing Company to meet demand. Clark took the scraps from the sheet metal and made gem ointment tins to sell to the Rawleigh and Mentholatum Companies of Freeport, Illinois to take advantage of leftover material from his manufacturing process. This was the start of a major product for the company – making metal containers for everything from hair spray to aspirin.

J.L. Clark has produced metal packaging for many national companies and brands, including Curad, McCormick spices, Kodak, Ray-O-Vac batteries, Band-Aid, and 3M. The company grew and innovated and in 1987 was rebranded as CLARCOR, a Fortune 500 company.