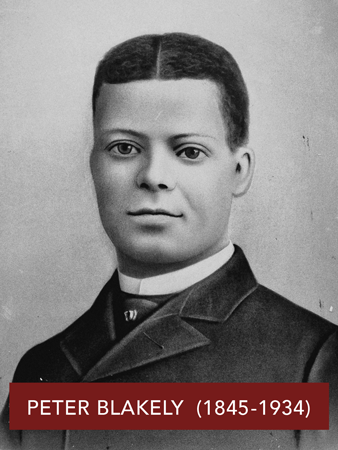 Peter Blakely was a slave in Charleston, South Carolina who escaped to Ohio and joined the Union Army in 1861. While serving in the Army, Blakely became acquainted with men from Rockford. When he was mustered out in 1865, he moved to Rockford.

Blakely married Hattie Howard in 1875. He worked as a janitor until he was able to buy some property and establish a truck farming business. He sold his vegetables and flowers in town.

In 1891, Peter and Hattie Blakely organized the Allen Chapel AME Church in the home of Hattie’s mother, Maria Donnelly. This was the first church for African Americans in Rockford. At the time, the African American population in Rockford was 143, out of a total population of more than 11,000.

In 1917, a new, permanent church was built at the corner of Elm and Winnebago, where the congregation flourished until 2006. The congregation then moved to a new home on Rural Street, where it continues to gather for worship.